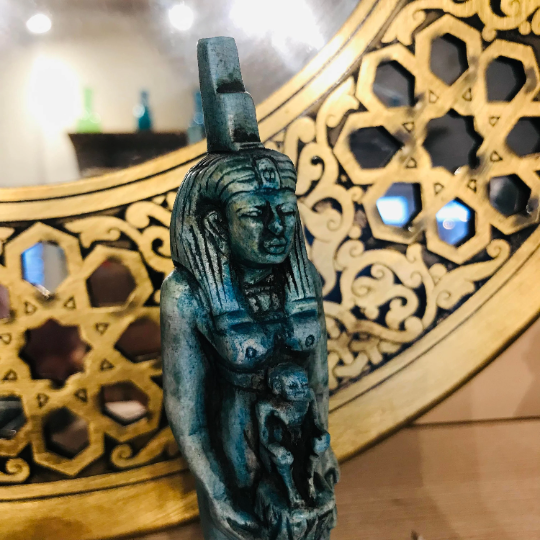 Isis the goddess of ten thousand names.
She is the supreme goddess. She is the divine feminine. Powerful in protection and well known as a bearer of the highest magic. Isis is the wife of Osiris, the god of the afterlife, and mother of Horus, the god of the sun. Isis is most associated with being a mourner, protector, and a mother. Symbols used to represent Isis include the moon disc, cow horns, wings, the kite hawk, and sycamore trees. Isis has been worshipped all over the world for millennia, even in London parts of the river Thames to this day are known as Isis, showing the pure power of this incredible goddess.

Praise be to Isis.

This beautiful Isis has been hand carved in Luxor, Egypt. She is approximately 15cm tall and 5cm at her widest point. She is depicted with the throne on her head and her son Horus in front of her. When she arrived in Avalon, I lovingly cleansed her with spring water, in a wild flower meadow near Glastonbury. She would complete and Alter or sacred space.