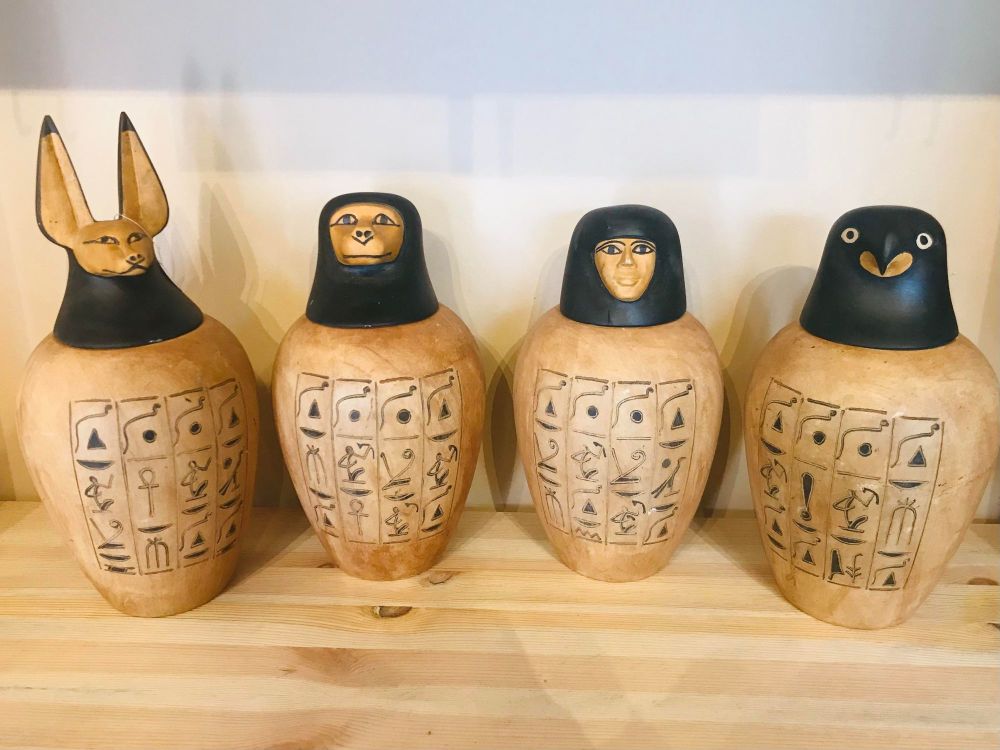 *Please note these Jars are made from solid Stone and weigh approximately 3KG EACH. Due to the weigh, I cannot ship them outside of the UK due to shipping cost. But if you would like to buy these Jars and you are outside the UK, I am happy for you to arrange shipping yourself. If you would like to do this then please select the click and collect option at check out, then send me an email so that we can arrange for them to be collected from the shop by your chosen courier.*

Canopic jars were used in the sacred funeral rites of the ancient peoples of Egypt (the Kem). They believed that certain organs were needed in the afterlife, so they stored them in these slightly macabre but beautiful jars. The heads on the jars represented the four sons of Horus.

The four jars are:

Imsety had a human head and carried and protected the liver.

Qebehsenuf had a falcon's head and carried and protected the intestines.

Hapy had the head of a baboon and carried and protected the lungs.

Duamatef had the head of a jackal and carried and protected the stomach.

The ancient peoples of Egypt (the Kem). Believed that the brain was useless, it was often discarded.

The Heart was the only Organ left inside the body. In the Duat, the Egyptian underworld, the hearts of the dead were said to be weighed against a single "Feather of Maat", representing the concept of Maat, in the Hall of Two Truths. A heart which was unworthy was devoured by the goddess Ammit and its owner condemned to remain in the Duat. If the Heart was found to be lighter, they were allowed to pass through to the underworld.

Each Jar has a hollow inside and a removable top.

Hand made in Luxor, Egypt.